Hi!
This is an update for the earlier Mail Art Researh Project-post.

I´m Miina Ruokonen and I´m making a bachelors research about Mail Art and Internet in Turku university in Finland. If you would like to help me you could participate by answering to a survey, which you can find from here Click Here to take survey. Answering will only take a few minutes. The survey will be open till January 16, 2009.

You can also participate by sending me mail art in the theme of "What mail art means to me?". All the mail art I receive will be in a web exhibition which comes out after the research. The size and technique is free. The deadline for the mail art is March 31, 2009.

You can send the mail art to this address:

If you have any questions about the research you can contact me by e-mail: miina.ruokonen(at)utu.fi. Thank you for your help!
Posted by miina at 07:01 No comments: 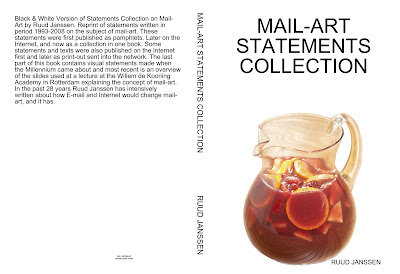 B&W Version of Statements Collection on Mail-Art by Ruud Janssen. Reprint of statements written in period 1993-2008 on the subject of mail-art. These statements were first published as pamphlets. Later on the Internet, and now as a collection in one book. Some statements and texts were also published on the Internet first and later as print-out sent into the network. The last part of this book contains visual statements made when the Millennium came about and most recent is an overview of the slides used at a lecture at the Willem de Kooning Academy in Rotterdam explaining the concept of mail-art. In the past 28 years Ruud Janssen has intensively written about how E-mail and Internet would change mail-art, and it has.

A colour-version of the book is also available. See an overview of all publications at:

Enjoy reading this book!
Posted by Ruud Janssen at 09:00 No comments:

CENTRO ITALIANO FEMMINILE MACERATA (CIF)
CIF, like every year, wants to honour women with an important demonstration meant to awaken the citizens' interest and to leave a tangible sequel to the day.
The intent is to honour them in the Arts, both visual and gastronomic; CIF is aware of the increasing attention of so many people taking part in concrete experiments during which they can learn useful and pleasant things.
To such intent the Association wishes to organize a Mail Art exhibition and also practical cooking sessions to teach how to economize, how to use good quality ingredients (biological produce), how to create new recipes and to use old ones which gratify the people who devote themselves to the art of cooking with pleasure and love.
To complete the project CIF will also organize a meeting in order to explain the basic principles of Mail Art and also the importance of using biological produce.

WOMEN'S DAY - MARCH 8, 2009
The Artists - Mail Art - Women
CIF is a women's association working in the civil, social and cultural fields with the intent of building a shared democracy based on the respect of human rights and of a person's dignity according to Christian principles.
CIF is autonomous from political parties, a non-profit-making association.
The manifestation which CIF intend to organize is meant to honour women in all of their aspects, Artistic, Cultural, Entrepreneural, Managerial (within the family) on the day which has already for many years been devoted to them.
Women, human beings, not similar but equal to men, in any part of the world with equal duties and rights, therefore third millennium women who conquer dignity, equality, political power and even in some countries, the highest positions in the state.

THE THIRD MILLENNIUM WOMAN
The artists and their friends are invited to send a non returnable work of theirs within January 31 st. The work should be in paper, card or any other material chosen by the Artists, the maximum size A4, the subject: The Third Millennium Woman, to be sent to:
Associazione CIF, Piazza Strambi 4 – 62100 Macerata – E-mail cifmc@libero.it
CIF undertakes to organize an exhibition (details of which will be given later on) of the received works on the occasion of the coming Women's Day (March 8, 2009) and to realize a Cd with the catalogue of the above mentioned works.

Certificate will be send to all participants from MMAF to acknowledge your mail art/s is in our permanent collection. Artworks will not be returned and become the collection of MMAF (Malaysia Mail Art Festival).

Please label your artwork/s as a GIFT or SOUVENIR – NO COMMERCOAL VALUE –.

Each artwork will be exhibited. Documentation will be launched online at :-

A new project
in tribute to Serge GAINSBOURG

Send your creations to :

Don't forget to mention your names, address, e.mail and websites or blogs.

A blog dedicated to this project :

Roswitha
Posted by Ruud Janssen at 22:20 No comments: 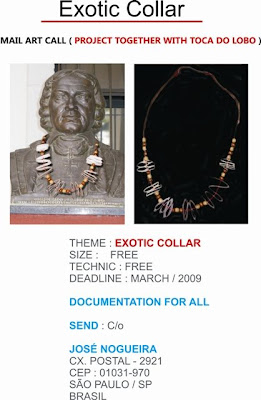 Posted by Ruud Janssen at 23:51 No comments:

I thought I'd offer you a digital gift : Impossible Possibilities, a free, downloadable A5-sized calendar you can print out at home – wherever that may be in the world.

The calendar comes with a cover and back page, and 12 months (in French) illustrated with the surreal art work from my SECRET HIDING PLACE.  Simply download the file (it's only 6 mb), print out on your home printer, cut the pages using the crop mark guides, staple up on top and tack to the wall. Interested? Hey, it's free. And feel free to send it around.

Posted by MATTHEW ROSE at 12:27 No comments: 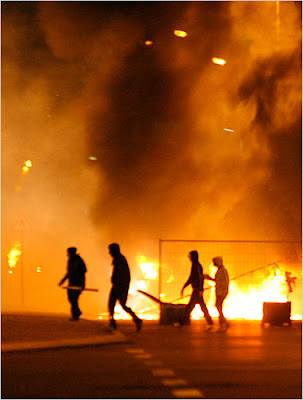 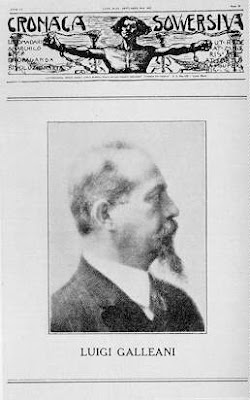 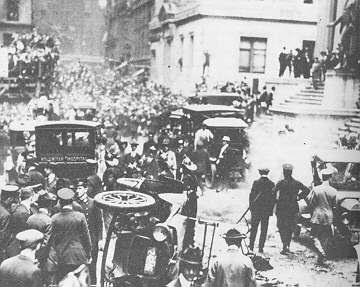 Welcome !! and A Call to Participants
I started this blog as a site where poets, artists, Visual Poets, Mail Artists, researchers, essayists, reviewers, artist-ragers, zine makers, comix, graffiti makers may have a place to contribute and display works which express their visions of the historical and contemporary interelated lives of Anarchy & the Arts--
This site is for any persons who are actively interested in and working in these areas
Theoretical letters are welcome, stories, photos, anything which
investigates the everyday all around one with a questioning Anarkeyological spirit & energy. Insight and Incite!
and ALSO CONTRIBUTE FAITS DIVERS INSPIRED BY THOSE OF FENEON--IN WHATEVER WAY THEY INSPIRE YOU
If you are interested please contact me at
david.chirot@gmail.com

I´m Miina Ruokonen and I´m new in this group.

I´m hoping that through this group I could reach mail artist/mail art
activists who would like to help me in my research. You can help me by
answering to a survey which is going to be on the internet in the
beginning of January. I will inform the surveys webpage later on this
year through this group.

You can also help me by sending me mail art. At the end of the
research there´s going to be a webexhibition. The theme for the mail
art is "What mail art means to me?". The size and technique is for you
to decide. The deadline for the mail art is 31.3.2009.

You can send the mail art to this address:

I would really appreciate everybodys help! Thank you!
Posted by Ruud Janssen at 22:58 No comments:

Umbrella's for Judith A. Hoffberg - USA

Judith has stopped doing email but she still enjoys getting snail mail with images of umbrellas.

Send your umbrella's to:

Judith is editor of the 31-years old magazine Umbrella's in which she always included a secton on mail-art. She has been diagnosed with cancer and is arranging things for her final journey. As a friend I start this call where you can send her some Umbrella's to join her in these last times....

Thank you.
Posted by Ruud Janssen at 12:14 No comments:

Node,I have two mail art calls to share with you. First is Mayworks 2009. Send a work 8 1/2 inches by 11 inches or smaller with some reference to "Work - evolution, revolution, devolution" or anything else pertaining to "work" to Mayworks, 4426 Island Highway South, Courtenay, BC, V9N 9T1 Canada by April 15th, 2009. Hosted by the Oceanside Art Gallery in Parksville, British Columbia. Opening May 1st, 2009.The second is the Mail Art Olympix which is coming soon at the same time as the Vancouver 2010 Winter Olympics. The deadline is October 15th, 2009. There are three "events." The first is self portraits. The second is artist stamps and artistamps. The third is manifestos.

Hosted by the Comox Valley Art Gallery and the Penticton Art Gallery.

Catalogue to all participants.

Submnitted by Ed Varney
Posted by Ruud Janssen at 11:16 No comments:

> I am hosting a mail art show, something I haven't done in 15 years!
> It is an open themed, any size, documentation to all, kind of show.
> Each piece will be displayed in a beautiful 2000 sq. ft gallery.
> Events will include a Presentaion by John Held Jr, the showing of the
> film "How to Draw a Bunny" and the opening of the Mail Art Time
> Capsule donated by Kalynn Campbell.
> Would you consider sending something by February 12th, 2009? Thank you
> very much.
> Send all entries to:


> Sincerely, Jenny Soup
Posted by Ruud Janssen at 22:23 No comments:

How do you save our planet Earth?

Tell us your strategy…

Please send your contribution to:

Friour Magazine (mail art and poetry on peace related issues) is celebrating its 10th issue next year.Send your contributions on the theme 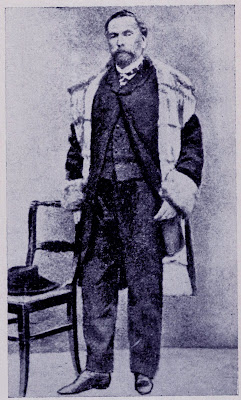 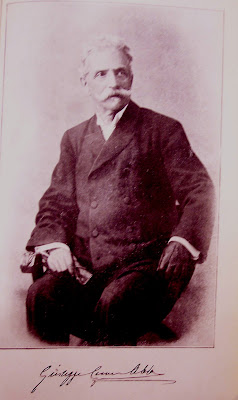 Posted by Chiarlone Bruno at 04:50 No comments:

Posted by Chiarlone Bruno at 04:48 No comments: 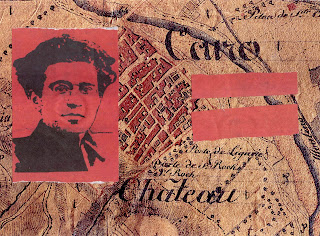 Posted by Chiarlone Bruno at 04:42 No comments:

The Last Show of the Shopping Trolley Gallery closed on November 31. There has been a great deal of artwork sent and I am very grateful to all of you for your support but please do not send any more from now on because I have to prepare for the Field Study Meeting to which you are all invited. We meet at 12 o’clock on the 3rd of January at the Tate Britain, Main Entrance, Millbank, London, SW1P 4RG, UK, where I intend to show the artwork and then we will go for a bite and a drink to a nearby pub.
If you miss the meeting don’t worry; sometime on the New Year I will send postal documentation to all participants. Meanwhile you can see the show on www.mailartmartha.org.uk Cheers and a Happy New Year to all!
Posted by Ruud Janssen at 09:54 No comments:

Theme: Temple - exploring internal or external space for meditation, reflection and spiritual realisation. It may be a built environment or sacred space internal. Or your own definition.

Please make it Children Friendly as it is posted at a family restaurant for the exhibition.

Documentation on this site.

The Mini[e]MailArt is an international e-mail art project of the Hungarian family art team called Arnolfini Archives (since 1993) that was launced in 2004. As it is indicated in inviting applications a pictural gestures according to topic are asked to be placed on the downloadable empty surface, then the completed work is asked to be e-mailed.

The works we get are going to be published continuously in the blog: http://arnolfini-mma.blogspot.com

Arnolfini Archives
Posted by Arnolfini at 14:53 No comments: