Send art of Any Size, Any Medium. Can be a literal or figurative interp of the topic--can include postcards, diary entries, journal pages, drawing, sketches. I will send mail art in return. This is my way of preserving the ancient ways. When was the last time you got a glimpse into someone else's psyche? Let's fight the erosion of personal communication. Virtual communication will never supply the intimacy that the handwritten words does. Deadline is August 1, 2009. Documentation provided to all. There will be a show at the Gail Borden Library. Send to: Dear Diary Mail Art Call 407 South Liberty St Elgin IL 60120 - USA. Email if questions, but you can't email an entry to me!!:) Friendlyfeline@sbcglobal.net
Posted by Ruud Janssen at 10:20 No comments: 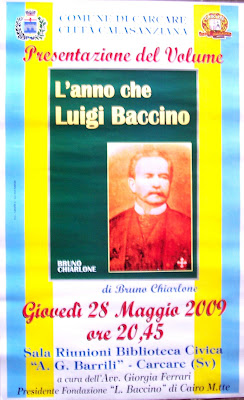 Posted by Chiarlone Bruno at 11:07 No comments:

To see details and some of our works visit the new blog: http://artistampstz.blogspot.com/

At birth, stamps live all together in a sheet and they come away from it when they become adults...
Create one or more than one stamps sheet. Any theme, any medium.
The "Taller de Zenon" will send you some of his own sheets recently done and all the received stamps sheets will be exhibited in our web-gallery (www.eltallerdezenon.com)
Size: A4 or A5. Any medium. Deadline: December 31st. 2009. Any theme (See some suggestions)

Suggestions:
Eroticism always had been one of the motors of human being ¿Is it still a motor at the present time? ¿Was it affected by the actual global crisis? Consider the option to work about eroticism as a theme in all the possible ways, the requiered size is suitable to develop it, and it will be interesting to prove how the actual crisis is affecting eroticism in connection with Postal Art. 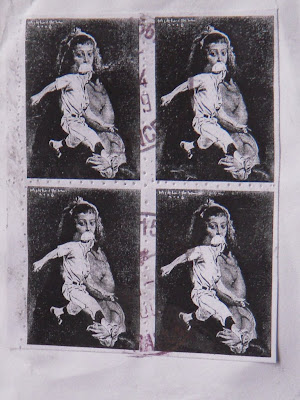 CLICK HERE FOR Article from Roberta Fallon & Libby Rosoff on some recent Mail Art and Confessions in Cape May.
Posted by MATTHEW ROSE at 21:11 No comments:

All art must feature bacon.  Free size, free technique, and free media (video, sound work, postcard, poetry, 3-D, etc.).  Anything goes - surprise me, shock me, make me sizzle, raise my cholesterol.  All art shown on blog.  Exhibition(s) to follow.  Additionally, a short film about bacon will include much of the received art.  Deadline is 04/01/2010.

Posted by Scott Ray Randall at 11:14 No comments: 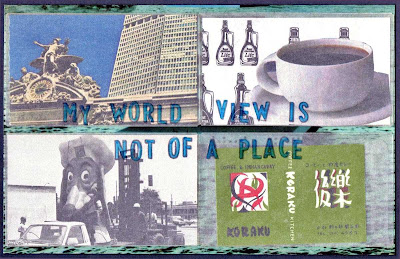 Expression of what your city or country is like. Anything that fits in mailbox.
Will post pictures http://worldview-mailart.blogspot.com/
Deadline August 1, 2009 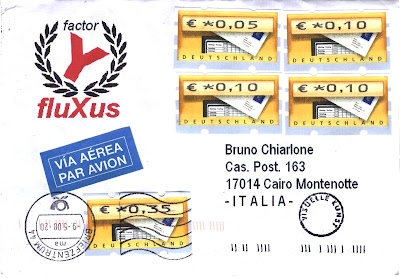 Posted by Chiarlone Bruno at 13:52 No comments:

Vrite me your suggestion about Luigi Baccino 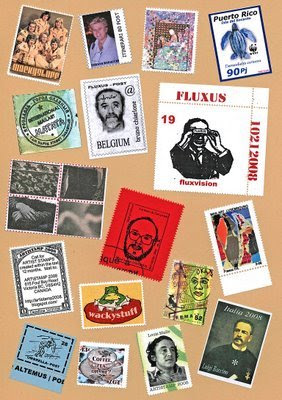 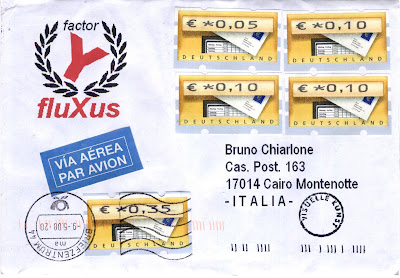 I read in less than two days, your book.

The initial interest for the history of Luigi fellow Baccini, has increased from the early pages of a personal curiosity, highly nostalgic.

As you may know I was born and raised in and I have lived places where you set part of the story. I was born in the house of Loppa soprana (Fontanina) and, after a few months, my parents have fallen in the house of Loppa sottana, then settled for a share, from John (Giuan) Carlini, a character a little 'misanthropy, from altar, who lived alone and was never married.
My childhood, free, with all its discoveries and adventures in rio Recoaro, in the woods and meadows surrounding the valley, is spent there, in the micro world that goes from the hill of Our Lady of the Wood, with its church, a Camponuovo, by serving as the Brichella and, further up from the house of GRENNI to Ravagni towards Dego from Montegoso to slopes, woods Montenotte.
In the house built for asylum by Luigi Baccino, the current Palace of the city, I attended the elementary school and averages. I will always remember the first day of school. I was six years old and I was accompanied by my mother to teach me the way. The day after I went there alone (with their friends then Bruno e Renato), because my parents had a store of "edible", as it was called in those days, and a tavern, and my brother who was only two years.
In that school I learned Italian as a language, because until then, I had spoken only the dialect of . Maybe some teacher has spoken of the benefactor L. Baccino, but did not find trace in my memory, perhaps for the distance and the years passed.
Sometimes I am again in a classroom, sitting at the fixed seats, the inclined plane and the hole for the ink on the central staircase or in the paths of the courtyard, with trees, where we played at marbles. More rarely, I think the storage of bicycles, which was on the back, towards the square Abba, in which, the third media Testoni, fumavamo hidden, the first menthol, which bought loose.
High schools began in the former barracks, now demolished, via Colla. I found that a fallback, in a temporary structure, as was the current school year. In fact, he was transferred two years later, in the palace of OPES. Even the old building of te University, in Via Balbi, with the lions of the steps, he was able to reproduce those emotions in children.
Shared in those years, the readings of Steinbeck, Hemingway, Pirandello, Pavese, that you wanted to arbitrarily put in the history of L. Baccini, with a transposition from future to past. Or maybe you wanted to add suicide to the hypothesis of a story already charged with mystery? And a final death designed by the same L. Baccino?
Even as an adult, rarely, I had the opportunity and the push to deepen the knowledge of the characters who lived and who wanted to enter, with their works in the history of and its inhabitants nell'anima more careful.
That is  success through the magazine Liguria Val Bormida or some story of my mother, relatives and friends, and now, through your book, engaging even for those not Cairesi, I am sure.
Allowed me to awaken, that curiosity, steeped in nostalgia, trying to go deeper in the substrate and far, some ramifications sopite or unconscious of my roots.
Mimmo Lovanio
(send to: Amici di Luigi Baccino - cas. post. 163 - 17014 Cairomont - Italy)
Posted by Chiarlone Bruno at 14:02 No comments: